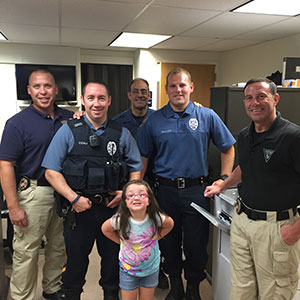 Ptl. Michael Hynes was a Class II Special for the Riverside Police Department for one year prior to taking a full time position with the Palmyra Police Department.  While serving as a Class II Officer, Ptl. Hynes received several awards for his community policing efforts in Riverside, including being one of several officers recognized by the Attorney General.  Ptl. Hynes played an integral part in the development of the Kidz Funzone Game Truck, outdoor movie nights, and the Haunted Police Station.

Ptl. Hynes served with the Palmyra Police Department for the last three years.  We are glad to have him back!

After the swearing in, Chief Eliason presented three officers Exceptional Duty Awards for their response to a call to a volatile call.  Ptl. Brendon Griffin, Ptl. Shane Pettit, and Ptl. Christopher Deffler were recognized for utilizing less lethal force by deploying a Taser in a situation in which deadly force was justified.